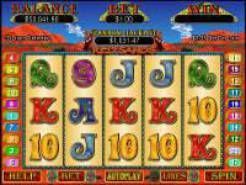 Play Now
Red Sands Slots is a 5 reel bonus video progressive online slot game created by Realtime Gaming that features 20 pay lines and a thrilling Australian outback theme. The game comes with a bonus feature, colorful graphics, and the opportunity to win lots of cash. Players can choose from coin sizes that include $0.01, $0.02, $0.05, $0.10, $0.25, $0.50, $1.00, and $5.00, making it a game that is appropriate for players on any sized budget. Join your mates in a wild Australian adventure in Red Sands Slots!

The Symbols of The Outback: Red Sands Slots

Imagine being surrounding by exotic animals, adventuring in the wild lands of Australia, trying to capture that coveted cash. In Red Sands Slots, players can enjoy fun graphics that include symbols of the Echidna, the Kangaroo, the Koala, the Moonscape, the Wombat, the Ace, the King, the Queen, the Jack, the Ten, and the Nine. The Kangaroo symbol acts as the game’s Wild symbol, complete with a 2x multiplier on all wins it helps create. This symbol will sub for other symbols in the game, helping players to make the most of every winning opportunity. The Moonscape symbol is the Red Sands Slots scatter symbol. It’s biggest benefit is that multipliers it carries with it. If a player lands two of these scatter symbols, they’ll get a 2x multiplier. However, if they land more than two of these symbols, they’ll increase that multiplier to 4x, 10x or 50x.

Players have the opportunity in Red Sands Slots to increase their winning potential when they trigger the bonus features of this amazing online slot game. The Free Spins bonus feature is activated when a player lands two or more scatter symbols on an active pay line. Players can even take advantage of this feature if a Wild symbols replaces the scatter, which is quite lovely. If a player triggers this special bonus, the player will automatically receive 10 free spins. The jackpot is another bonus feature Red Sands Slots players can look forward to trying to activate. When a player lands five Kangaroo symbols on a pay line they’ve activated for the current spin, they will win the big jackpot of 10,000 coins. However, there are smaller jackpots that can be won, as well. For example, if a player lands one Kangaroo and four Koala symbols, they’ll win a smaller jackpot of 3,000 coins. If they land one Kangaroo and four Wombat symbols, they’ll win the mini jackpot of 2,000 coins. In addition to these symbol-based jackpots, Red Sands Slots also features a progressive random jackpot that any player can win at any time, after any spin.
Play Now