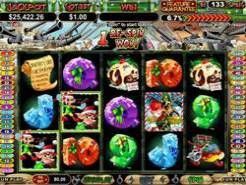 Play Now
In a good old-fashioned battle between good and evil, Elf Wars Slots allows players to get involved in the ongoing holiday battle between Santa and his good Christmas elves and Rudolph and his bad Christmas elves. This five-reel, 50 pay line online progressive slot game by Real Time Gaming gives players a fun way to enjoy the holidays all year long. While it has a Christmas theme, the bonus features and thrills it brings make it a great choice during any year. Players can choose to use coins that range from $0.01 to $5.00, also allowing any online slot player the opportunity to play.

In true holiday spirit, the symbols in Elf Wars Slots are quite festive. Players can see symbols that include bad elves, good elves, Christmas pudding, a bucket of food (elves throw at one another), jingle bells, the naughty list, a North Pole sign, Rudolph, Santa, cranky snowmen, a super-powered sleigh, and toys. Since the leaders of the story are Rudolph and Santa, both of these symbols are Wild symbols in Elf Wars Slots. They’re both ready for a ferocious battle and will take over other symbols to help players win more prizes. The only symbols they can’t sub for are the good elves and the bad elves. A player who lands five Wild symbols on an active pay line will be awarded a 2000x multiplier.

Elf Wars Slots has two Scatter symbols, which are the good elves and the bad elves. Not only are they necessary to trigger bonus features, but they also come with a 100x multiplier if five appear on a reel. While landing five is quite exciting, it only takes two of these symbols to get a re-spin bonus. In the re-spin bonus, the reels that feature the elves will be held, and all other reels will spin again to help players get even more prizes. If a player gets another elf during this re-spin, they will activate the bonus features. The good elves have their features, and the bad elves have their features. The bad-elf features include “Rudolph’s Rampage” bonus feature, which takes players to a toy factory that has been looted. The player is then forced to choose one of the eight different places in the factory to try and find the missing elves. The fewer tries it takes players to find the elves, the bigger their reward will be. Players can win up to fifty free games in this bonus feature. The second feature hosted by the bad elves is “Rudolph’s Revenge,” which gives a player seven free spins. Each of these spins comes with a double multiplier. Also, any bad elves that show up during these spins act as additional Wild symbols. The first feature hosted by the good elves is the “Santa Strikes Back” game. In this game, the player is given seven free spins. Players will see a background candy cane in this feature, and if they land Santa, good elves, or the North Pole sign, the candy cane will begin to light up. If the star at the top of the candy cane illuminates and all five stars are lit, the player will get seven more free spins and a doubled multiplier. The second bonus feature hosted by the good elves is the “Jackpot Spins” feature. This game shows the player a wheel that has six different parts. The wheel will spin three times, and the player will get the prizes the wheel lands upon. Awards include the progressive jackpot, activation of the “Santa Strikes Back” feature, and a 100x multiplier.
Play Now