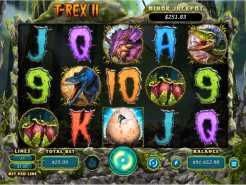 Play Now
Real-Time Gaming is excellent at releasing sequels that not only pay respect to their original versions but also take the slot player to an entirely different level of thrills. T-Rex II Slot does exactly that. This five-reel, 25 pay-line bonus progressive video online slot game comes with an exciting prehistoric theme, amazing bonus features, low coin size options, and excellent graphics. When you add in multiple jackpot opportunities and an easy-to-use interface, T-Rex II Slots is certainly a game you won’t want to pass up.

The scene is set quickly in T-Rex II Slots, which the backdrop being a thick forest with a prehistoric cave insight. The sound of monstrous dino feet crashing through the forest help place players right into the era. Players can expect to see symbols on the reels that include a dinosaur egg, Edmontonia, a prehistoric plant, Stegosaurus, Triceratops, the Tyrannosaurus, a volcano, and playing card symbols that range from Ace to Nine. The dinosaurs are the highest paying symbols, giving players the chance to win from 1000 to 2500 times their bet when five of the same dino is landed on the reels. As expected, the T-Rex is the Wild symbol. Not only will this symbol sub for other symbols, but any wins that he helps create will be doubled. This creates more winning opportunities on the reels of T-Rex II Slots.

Whether you prefer to spend a little or are a high roller, T-Rex II Slots is a game you’ll enjoy. The coin sizes begin at only $0.01, offering those on tight budgets the chance to still enjoy this thrilling online slot game. However, if you prefer to spend more, other coin sizes range all the way up to $5.00. The fixed jackpot is set at 5,000x, the original bet. In addition, there are also two progressive jackpots that can be won.

T-Rex II Slots comes with three different bonus features that can help players pad their bank account quite nicely. The first bonus feature is called Terror Wilds, and this happens when the T-Rex symbol lands on the board. This symbol will then “eat” the other symbols, which gives the player more cash in the bank. The second bonus feature is the egg feature, which is triggered when three egg symbols land on the board. When this occurs, the player is given ten free spins. If the player lands four egg symbols, they’ll receive 20 free spins. If they’re fortunate enough to land five egg symbols, they’ll gain an impressive 100 free spins and an instant win. This free spins feature also includes the Terror Wilds, which can mean players can rack up on cash during these rounds. The bonus is able to be triggered again during the feature. The third bonus feature in T-Rex II Slots is the jackpot feature. The two progressive jackpots are randomly triggered. This means they can drop into a player’s bank account at any time after a spin is completed.
Play Now