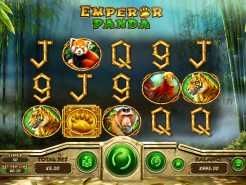 Play Now
Asian themed online slot games are not a new concept, but Real Time Gaming somehow added a unique and thrilling twist to their Emperor Panda Slots. This five-reel, 50 pay line bonus video slot offers players the chance to try their luck for as little as $0.01, with coin sizes ranging up to $1.00 per line bet. The game offers incredible graphics, a free spin feature, expanding reels, and a jackpot feature. When players enter the Emperor Panda Slots realm, they’ll find themselves right in the middle of an Asian forest, with bamboo scattered around the screen. The Emperor Panda Slots symbols are nicely designed and include a bird, Gold paw, a monkey, a panda, emeralds, a red panda, a tiger, and traditional playing card icons that range from the Ace to a Nine. The panda acts as the game’s Wild Symbol, which can help players win a lot more cash. The Wild Symbol has the ability to sub for other non-winning symbols, which can then help create more winning opportunities.

In order to trigger this feature, players must collect six emerald symbols. When this bonus feature is activated, the player will be given three re-spins. During these re-spins, the emeralds will not move, however. If a player lands more emeralds during these spins, they’ll collect even more re-spins. When a player runs out of emeralds, the game ends, and a prize is awarded. This bonus feature comes with a second part, as well. It deals with jackpots. Emperor Panda Slots features four different jackpots that include the mini, the minor, the major, and the grand. The further you go into this bonus feature, the better your chances are of winning the larger jackpots. The bigger jackpots are triggered if a player lands emerald symbols in all four corners.

Everyone loves the chance to get a free spin when they’re playing online slot games. After all, a free spin gives you the chance to win money without spending a dime. Emperor Panda Slots does have a free spins feature that is triggered if a player lands three or more Gold paw symbols. When the three Gold paw symbols are landed, the player will be given six free spins. The good news it that during the free spins, the game gives players more Wild symbols, Scatter symbols, and emeralds that it usually does. This feature can be reset if a player lands three more Scatter symbols (Gold paw symbols).

With today’s players being busier than ever before, Real Time Gaming has given them a chance to play Emperor Panda Slots from any location due to mobile playing capabilities. Players can now enjoy this online slot game on their mobile phone or other mobile devices.
Play Now