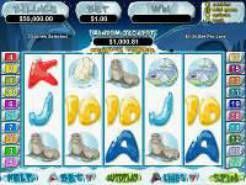 All About Penguin Power Symbols

Penguin Power Slots features fun symbols that include a baby penguin, fish, an igloo, an adult penguin, a seal, the Ace, the King, the Queen, the Jack, the Ten, and the Nine. The baby penguin symbol is one of the more exciting symbols and it only appears on reels 2, 3 and 4. It is the game’s Wild symbol and will substitute for all other symbols (except the scatter igloo symbol) and help players create much larger winning combos. Any wins created with the Wild baby penguin come with a 2x multiplier. The adult penguin symbols are also quite lucrative. They come with a 2500x multiplier on an original line bet when a player lands five or more of these guys. That being said, the other graphic symbols are also profitable. Anytime a player lands two to five seals, they’ll get an added 1000x and even the fish and penguin eggs symbols can be worth up to 500x a bet.

The igloo is the Scatter symbol in Penguin Power Slots and it comes with it’s own bonuses. Giving players shelter from the wintery winds of the artic, the igloo symbol can trigger a free spins feature. When players land two or more igloos on the reels, their bet is multiplied. When they land three or more igloo symbols anywhere on the reels, the Penguin Slide bonus feature is triggered and players will get a chance to win up to 25 free spins. During these bonus free spins, players will see extra igloos and baby penguins added in and if a player gets a baby penguin on the reel 1 or 5 with an igloo, the penguins will then slide into the igloo and a prize will be shown.

One of the coolest things about the newest Realtime Gaming Auto Spin features is the fact that it’s fully customizable. Players can easily and quickly choose how many auto spins they want to pre-set. Whether they choose 5 or 1000, the player is in complete control over their spin totals. Taking a step even further, players can click on options and scenarios where they would want to stop spinning. For example, a player can set up the Auto Spin feature to stop after a jackpot is won, when a feature is activated, or if a win is larger than their desired amount.
Play Now