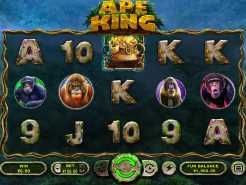 Play Now
Grab your gear and venture into the wild jungle of monkeys and cash in Ape King Slots. This five-reel, 243 pay line online bonus video slot offers thrilling adventures for players who prefer coin size options ranging from $0.01 to $0.50. It features a free games bonus opportunity, as well as a Jungle Battle bonus opportunity, making it a great way for slot lovers to win extra cash. In addition, the Ape King Slots jackpot is extremely generous, giving players a chance to win 1,666 times their original bet.

Gorillas Are Worth Gold In Ape King Slots

Symbols include a bonobo, a chimp, a gorilla, a mandrill monkey, an orangutan, a pot of gold, and traditional slot card symbols ranging from Ace to nine. The gorillas are definitely the symbols to wish for, as they are the highest paying. However, the lower valued cards will also give players pay outs if they show up three or more times on the reels. Another special symbol to keep watch for in Ape King Slots is the pot of gold symbol. This symbol only shows up on the three innermost reels. Players will get instant prizes if two or more show up. Acting as the game’s Wild symbol, the pot of gold icon will also substitute for other symbols and can help player pad their bankroll even more.

Ape King Slots offers players several chances to win even more cash with added bonus features. The free spins bonus feature is sometimes randomly activated, but can also be triggered by landing four pots of gold. There is determined amount regarding how many free spins the player will receive when this is activated. A second bonus feature offered in Ape King Slots is the Jungle Battles feature. This feature is a bit complicated to understand, but it starts with the free spins round with the Ape King and one monkey shown on top of the reels. If a player lands a monkey symbol, it’s added to the monkey’s side, and if a player lands the Ape King, the King will eat any matching symbols to his left and give the player a prize. This continues until all monkeys are eaten by the King, or the player collects enough monkeys to knock the Ape King off the reels.
Play Now