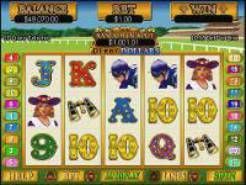 Play Now
While Kentucky is well known for its women and bourbon, the state is most often associated with horseracing and the Derby. Each year, celebrities flock to the state to see the ponies run in the world’s fastest sport. Derby Dollars Slots take players right to the infield action, with a thrilling horseracing theme, high-quality graphics, fun animations, and entertaining sound effects. This five-reel, 20 pay line online video slot game, created by Real Time Gaming, also features a progressive jackpot and a bonus feature. With coin size options starting at only $0.01 and ranging to $5.00, it’s a great online slot game choice for players on any sized budget.

Place Your Bets Before The Race: Derby Dollars Slots

Many slots make it quite challenging to figure out exactly how to bet on each spin. In fact, players sometimes must be highly experienced in online slot gaming to understand what they’ve bet upon and what outcome it could bring. However, in Derby Dollars Slots, betting is extremely easy. Players simply choose their preferred coin size and spin the reels. There is a fixed limit of one coin per spin, which eliminates the confusion that often accompanies other slot games that offer multiple coin options on each line.

The Horses Are Being Called To The Gate: Derby Dollars Slots Symbols

One of the better features of Derby Dollars Slots is the high quality of the graphics. Real Time Gaming is known for fantastic graphics, and they have featured them well in this online progressive bonus slot. The game's symbols include binoculars, a coin, a cup, a horse, a jockey, and a lady. Also, the game has traditional slot symbols that include traditional playing cards ranging from Ace to Nine. The horse is the most important symbol of the game and carries the ability to substitute for other symbols in the game, as the game’s Wild symbol. This helps players win better payouts because they can create winning combinations where they may not have previously been one. Of course, the horse will not substitute for the gold coin symbol because the coin acts as the game’s Scatter symbol. The top pay out of the game is 3,333, but if a player lands five horses, they will be awarded the progressive jackpot. Thankfully, the jackpot awards the same amount no matter if the player has chosen to play at the maximum bet amount or not.

One interesting feature Derby Dollars Slots contains is the Skill Stop Feature. This feature allows players to decide when to stop the reels, giving them more control and allowing them to use skill to determine when their best chance of winning might be.

Free Spins Are Icing On The Cake In Derby Dollars Slots

Derby Dollars Slots also comes with a free spins bonus feature, which can ultimately lead players toward winning giant amounts of cash. Players have to land two gold coin symbols to get their hands on the free spins. After landing these symbols, the player will then be awarded up to 25 free spins. Any wins that are accumulated during the free spins bonus feature will be tripled. In addition, Derby Dollars Slots players can even retrigger this feature, which can lead to more and more cash.
Play Now