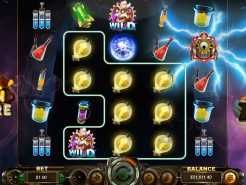 Play Now
For online slot lovers who enjoy unique themes, Dr. WinMore Slots by Real Time Gaming is one slot that will get their attention. This five-reel online bonus video slot features 20 pay lines and a jackpot worth 300 times an original bet. Players can follow the eccentric character, Dr. WinMore, and his helpers around as they work on a potion to make people rich. The game is wildly colorful and guaranteed to keep players entertained.

There are undoubtedly online slot games that you cluster pay systems, but they aren’t a typical setup for most slots. In the cluster pay system, whenever winning symbols are calculated, they disappear, and new characters drop for the top of the screen to take their place. This system of play starts whenever a player lands the same symbol four times or more. If four matching symbols land vertically or horizontally next to one another, this system is activated and come with multipliers of two times, three times, or six times the total bet. For example, the first time a cluster shows up, the player gets their pay out doubled. The second time it shows up, the player receives their pay out tripled, and when it happens a third time, the pay out is multiplied by six. Other slot games often have bonus features or free spins that work in the same manner, but since Dr. WinMore doesn’t technically have a bonus feature, this gives players the chance to get extra opportunities to win.

Dr. WinMore Slots comes with four different categories of symbols, making the board everchanging and always attractive. The standard symbols of the game include blue tubes and orange tubes. Three blue tubes will award a player with 75 coins, and eight or more orange tubes will award the player with 50 coins. The mid-level symbols include the yellow jar, the red beaker, and the purple tube. They are higher paying than the standard symbols, with eight purple tubes awarding a player 150 coins. Also, either yellow jars will award the player 125 coins, and the red beaker will award 100 coins. The high-level symbols include the blue bulbs, green tubes, light bulbs, and plasma bulbs. If a player lands eight plasma bulbs, they will earn 500 coins. They can also earn 300 coins for light bulbs and 200 coins for green bulbs. The last type of symbol is robot symbols. These are interesting because they each come with a unique ability. The blue robot will clear one row, the yellow robot will clear one column, and the red robot will remove any nearby symbols. This allows other symbols to connect and more winning combinations to be formed.
Play Now